Last item on cross-promotion (at least for a while).

Here is Walt shown walking to his new DeSoto as the ad copy ties Disney's success to the type of automobile he drives. [Note: the DeSoto was introduced by Chrysler in 1928 and went out of production in 1961.] 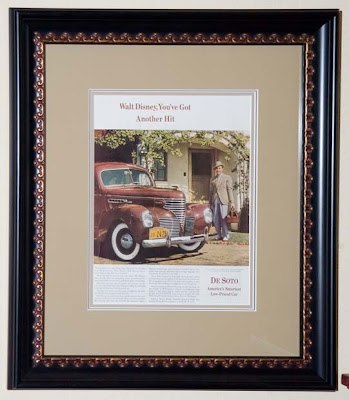 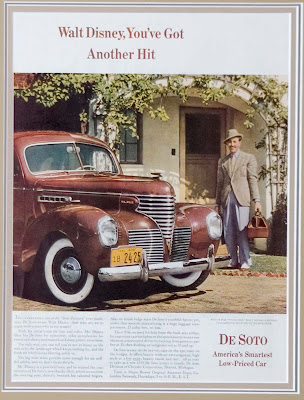 So, here is what one site (prewarcar.com) wrote on the relationship between Disney and DeSoto following an internet "quiz" on the subject:

Walt Disney's DeSoto 1939. Not one of the competitors had serious problems identifying the 1939 De Soto S6 correctly. So that alone was not enough to make yourself stand out from the crowd. A lot less of you recognized Walt Disney, one of the stars that was asked to show up in Chrysler's advertising campaign for the "America's Smartest Low Priced Car." Like many times before we had one -somewhat hidden- question about the relation between this man and machine. Still some five competitors went as far going into the trouble to elaborate on that aspect! The DeSoto-Disney advert copy reads...: "DeSoto owner Walt Disney." A few of you put question marks behind the presumption that wealthy Walt really would have owned an average family car like the DeSoto to park it in front of the Disney Residence (TheSilverLakeNews.com), where the photo probably was shot. Kim Koffman writes: "I doubt that he personally owned a mid-priced car." which is close to the truth. In the end we decided the overall best answer was by Dominik Ridder (Germany) who wrote (aside the car type): "Disney did promotion for DeSoto and received the car as bonus additionally to the charge."

An interesting article, but the comments about Walt being "wealthy" at that point in time may have been overstated. Few of Disney's films were profitable during the first release and the cash that was generated was generally re-invested in the next project (at least in my reading). Licensing Mickey into non-animation sectors did provide extra cash, but there was still financial pressure. But Hollywood of the 1930's was not much different than today -- the "appearance" of success was an important part of the struggle to be successful. In a former lifetime, I worked for a number of radio & TV stations where the "barter" economy is alive and well, which leads me to suspect that Walt's transportation was provided as part of a "trade-out" for his appearance in the ad. But, I could be very wrong...

[Another Note: I just checked eBay and found a number of Disney-DeSoto ads for sale - each showing Walt is a different pose (from sitting relaxed in a lawn chair beside the car to a more formal stance). By the way, it looks like the going price is around $12.]

Update: Check Mark Sonntag's posting for another Disney/DeSoto ad. When I first saw the ad I thought it was a great "more relaxed" Walt -- at least until I saw the butler bringing Walt a drink!

As a side note, here is another great example of how I can go overboard with framing. My sister, Deb, gave me the ad as a present and she didn't pay too much for it. I, however, spent almost $100 putting this ad in an elegant frame. Why? I wanted to put it next to the following picture of Walt Disney... 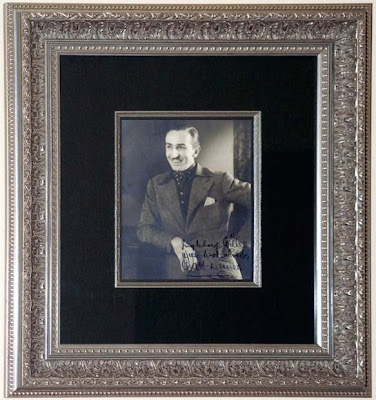 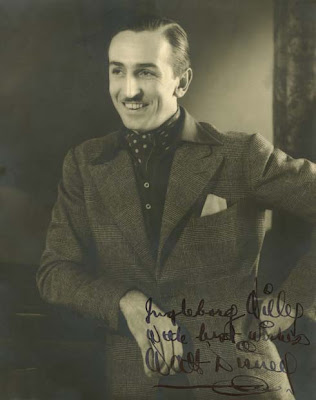 This is really a fantastic picture of Walt! It's large and Walt has assumed what is called "The Hollywood Pose" for the picture. [Note: I'm not sure what it means, but a number of dealers have used this terminology when they see the picture for the first time.] Again, I probably went overboard on the framing, but a special photograph from that era needs to be framed in a similar manner. So, here's how it all looks on the wall (along with a concept drawing of the Dwarfs and a poster from "Snow White"). 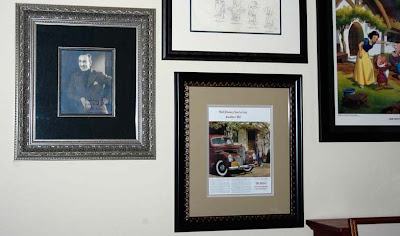