This is a fantastic 4.5-foot Pan Master Background from "Sleeping Beauty" (1959) is attributed to Eyvind Earle (1916-2000). Be sure to click on the lower image to see more detail. "Sleeping Beauty" (1959) represented an interesting departure from previous films. The decision to film in wide screen (2.5:1 aspect ratio) changed the way some elements would be filmed -- especially the backgrounds. It is difficult to fully appreciate this background in a photograph. The size and detail just gets lost without a sense of perspective and the inability to walk up to the image and see all the detail in context. Perhaps this photo of the background hanging on the wall provides some frame of reference: 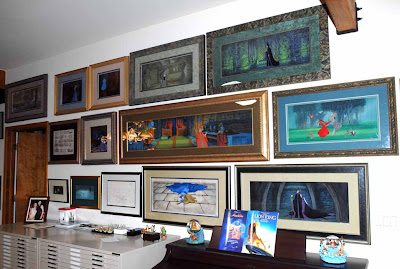 The majority of the images in this picture are from "Sleeping Beauty" (1959) and a significant number of backgrounds painted by Eyvind Earle.

Non-key cels have been added to increase it's general appeal. However, since they cover up a couple of nice detail areas, I may remove them and just showcase the background.

For more information on Eyvind Earle, please read Labels>Background-Earle Eyvind in this blog.

From “Sleeping Beauty” (1959). A 55"x12" Master Production Background painting of the interior of the Throne Room painted by Eyvind Earle (1916-2000) and cels of the Three Fairies (Flora, Fauna & Merryweather). One of Earle’s finest paintings used in the film, it has unusually fine detail and bright colors. Acquired 2004. SeqID-1166 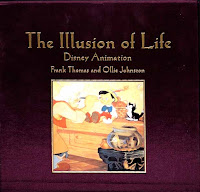 Portion of the Earle Throne Room background shown on page 158.
Posted by Bob Cowan at 5:35 AM