"Gertie The Dinosaur" (1914) by Windsor McCay is a piece of history. While it may not have been the first animated film, it definitely thrust animation into the public awareness. Various sources indicate there were about 10,000 pages drawn and that around 400 exist today. What some don't realize is that unlike current background and cel combinations, Gertie and the background were hand drawn each time. The VanEaton site had some background on Gertie:

McCay enlisted the help of a young neighbor, John A. Fitzsimmons. Fitzsimmons traced the backgrounds onto rice paper, and McCay did all the drawings of Gertie. Ten thousand drawings were inked on rice paper and then mounted on cardboard for registration. By mounting them on cardboard, McCay was able to flip the drawings through a primitive machine to check his work. 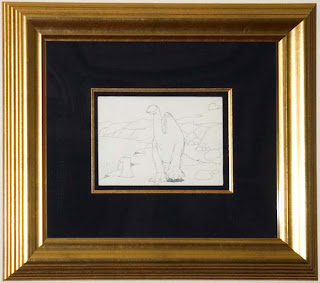 While any drawing from the film have value, some are more collectible. I was looking around the web and noticed about 50-60 are currently up for sale. Of that number, about half are "so-so" in terms the Gertie image (face can't be seen, etc.). From my perspective, this drawing of Gertie is one of the better ones -- a good view of the face, Gertie is showing some character and there is good detail (especially with the outstretched leg). 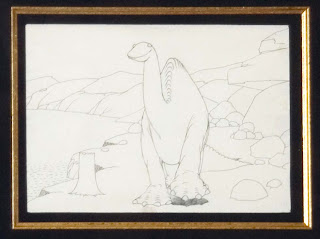