This is general background information on Eyvind Earle (1916-2000)

Image: "Sleeping Beauty" (1959) watercolor concept painted and signed by Eyvind Earle ([18"Wx12"H]; from The Cowan Collection; acquired 2004; SeqID-0962). For other Earle holdings in the collection, select Label>Name-Earle Eyvind.
When we first started collecting animation art, our daughter was less than a year old and the art that we bought tended to reflect that moment in time -- the "cute" character stuff (Mickey, Bambi, Dumbo, Winnie the Pooh). And the art fit the Disney Motif in our daughter's room. It wasn't until we were offered some background art that we really started to pay attention to what was behind those cute characters. After we had purchased a few backgrounds, I can still remember pushing , which won an Academy Award
Wikipedia: Eyvind Earle and Medieval Cottage] 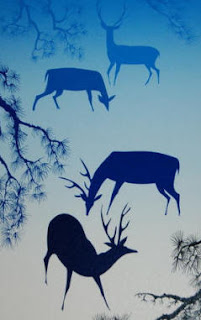 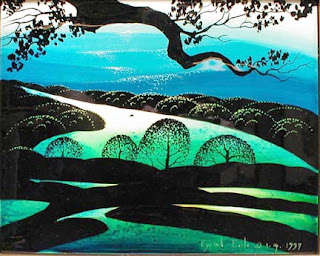