As someone who started his own company and faced extinction more than once, I have had a particular interest in business-end of the Mouse and the relationships that Disney had with Lionel and Ingersoll. Let me preface the following by saying that my comments are based on my general research. There are many that have greater knowledge of this subject area than I! For starters, please check out Vintage Disney and the posts about Disney's marketing wizard, Kay Kamen. If you find anything here interesting, dig in and explore the early history for yourself!

In those early days, Disney did not have "the golden touch" that many associate with his name today. Looking back at some of the early history, Disney had his own share of cash flow issues. During the late 1920's, Mickey Mouse was starting to be a recognizable figure but Popeye The Sailor still led the national popularity polls. Licensing Disney characters was seen by Disney as a way to provide positive cash flow without significant expense. During this period there were a number of efforts undertaken to enter the licensing business and those historical aspects are outside of my scope of knowledge. But there were two products that caught my attention: the Ingersoll Mickey Mouse Wrist Watch and the Lionel Mickey Mouse Handcar. 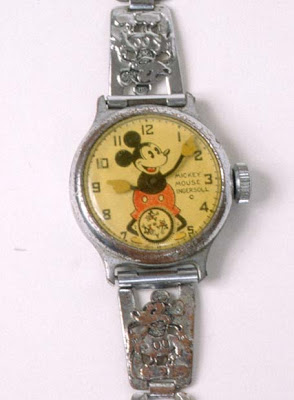 SeqID-0531
The watch we have in the collection is not a great specimen. The dial is too yellow and the silver plating is flaking off. But it didn't cost too much and it does fill a significant historic marker.

Joshua Lionel Cowen (Lionel Trains) had a very prosperous company that seemed to dodge the 1929 stock market crash. But, the economic crisis really hit Lionel in 1931 when sales dropped dramatically as Americans tightened their belts. Lionel finally went into receivership. In late 1933, Lionel introduced the Mickey Mouse wind-up handcar and the reaction caught Lionel by surprise. Selling for $1 or less ($16 in 2007 dollars), Lionel sold over 200,000 units in under four months and could not keep up with demand. However, with a net of only $.50 or so Mickey's success could not get Lionel out of the hole. But it did bring Lionel much needed cash flow, positive business press and generated access to funding for other profitable projects. 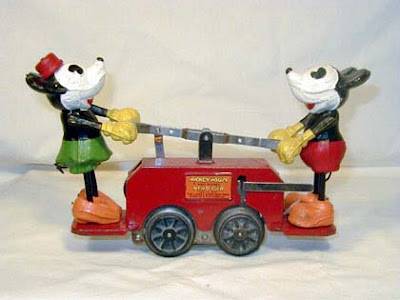 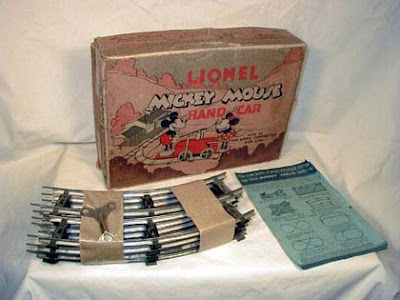 SeqID-0794
We were very fortunate to find a handcar in excellent condition. The tails on Mickey and Minnie are intact (often they are the first pieces broken), the track is great, the box is in good shape and the manual is in great condition.

In the end, it was a win-win situation. I'm not sure how much hard financial benefit Disney received from these two success stories, but they did serve to increase Disney's visibility in the marketplace and the success experienced by these two licensees certainly helped recruit other firms looking for similar financial results.

There was an interesting article in the Los Angeles Times from 1988 in which the reporter sought to answer "What is the most desirable Mickey Mouse collectible?" The author concluded that while both the watch and the handcar are both prime examples of items with broad appeal, the quality and durability of the Lionel Mickey Mouse Handcar earned it the number one slot.

After looking at some of the prices out there, this has become a real buyer's market. In all probability, the selling prices will continue to drop over the next year and this may be a good time to pick up some very nice items -- if you have the financial resources to do so.

Seller's notes: This toy is seldom found in this condition with absolutely no touch ups or repaint. The figures are in mint condition and still have their original tails. The red handcar is mint on the front and top, and has only minor play or storage wear on the rear side, unseen while on display The hand car, bell and on/off switch all work as they should. Included is the original key, all 8 sections of track plus a rare flyer that shows the optional track layouts available at the time. The box is firm and complete with all staples intact -- lid corners carefully reinforced inside. The box has a sticker over the model number that reads "1101," an incorrect number (1101 is the number for a Lionel 2-4-2 locomotive). Produced during 1935-1937.

I found a great web site that lets you put costs from years past into current dollars. Check out the calculator at "Measuring Worth."

Charles Solomon "Mickey Mouse's Birth Was One Of Desperation." Los Angeles Times, Jul 23, 1988 (the link was too long to paste. Do a search to pull up the article)

Disney Achieves (searching on "mickey" and "mouse")
Posted by Bob Cowan at 7:40 AM