Merry Christmas and Season's Greetings!
Since I will be away for part of December, I thought this would be a good opportunity to post some Christmas/Holiday related art. To see other holiday related items, select "Category-Holiday" from the "Content by Category" list on the right.

Speaking of the "Grinch," here's a nice item... A sketch of Max and the Grinch signed by Virgil Ross. To my way of thinking, Ross was one of those less known animators that made a significant contribution to the art and character development of some of our best known cartoon figures. This sketch was done by Ross in his early 90's. (For other Ross items, check the "Names-Ross" entry.) 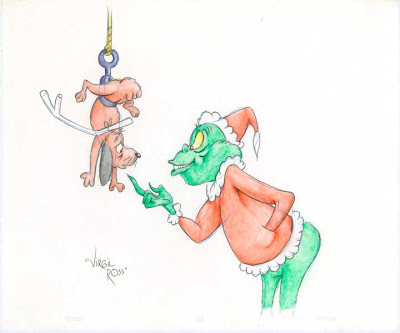 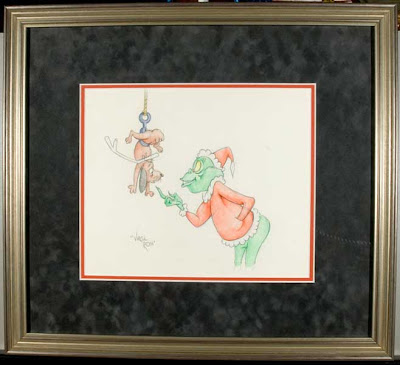 Seller’s Comments: An item by Virgil Ross, who I had the privilege of knowing quite well. An outstanding example of his pencil work. If you consider that he did this at the age of 93+, it is even more amazing still.

His introduction to cartooning was in high-school, where he took a class in that art form. Early work was done for Charles B. Mintz (later Screen Gems), Ub Iwerks studio, and then on to Walter Lantz, where he began animation work. In 1935, he moved on to work for Leon Schlesinger at Warner Bros. where he spent about 30 years, first under Tex Avery's supervision, until 1942, then for Bob Clampett, and finally with Friz Freleng. His resumé also includes time spent with such firms as Filmation (where he worked on the early '70s Star Trek: The Animated Series), Hanna Barbera, and Marvel Comics. He was notably self-effacing. In an interview with John Province in 1989, he is quoted as saying "I always had an eye for movement, and I think this kept me in the business a lot longer than a lot of guys, despite the fact that I really wasn't very good at drawing. When I started out in animation, you didn't have to be a good artist. I just had a little natural talent, and it's mostly just timing anyway." [1] Of the very many characters Ross animated, he is most closely associated with Bugs Bunny, but also did a great deal of work involving Daffy Duck, Yosemite Sam, Tweety, and many others.