First of several postings...  "Don Donald" (1937) was Donald's first time as a headliner and introduced Donna Duck.  Donna was a little more "assertive" in this film -- her character was lightened in subsequent films.  Because of its significance, it is a good film for collectibles...

Here are some scraps from the Ingeborg Willy Scrapbook (who worked in the Pen and Ink Department in the late 1930's).

What I liked about the Cactus was the fact that you can see the erasure marks as the character was refined. It really gives you insight into the artist's process.

I was just looking at these and thought that the Disney donkey sure looked a lot like Sparky from the Fleischer "Sparky and Hunky" series.... 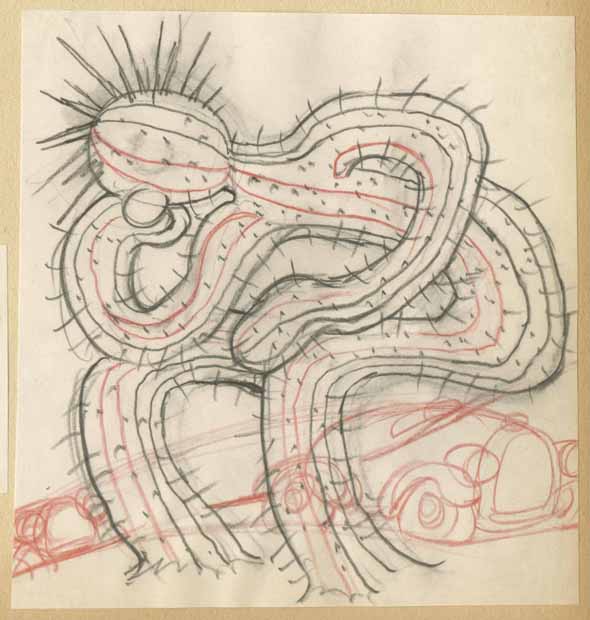 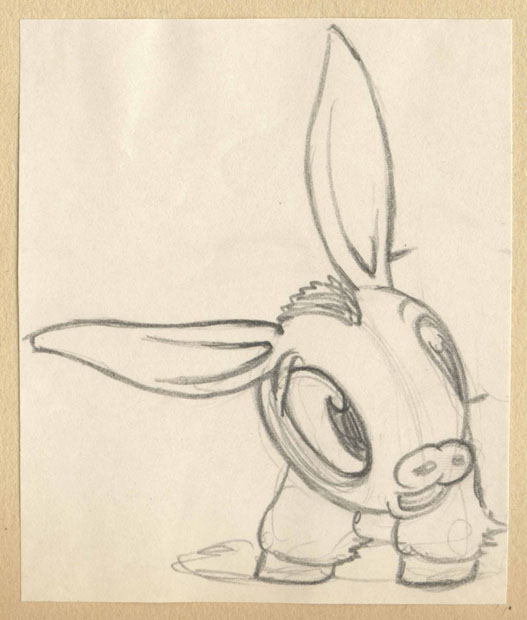 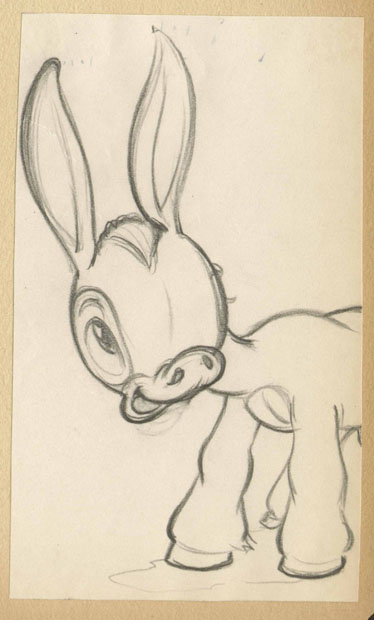 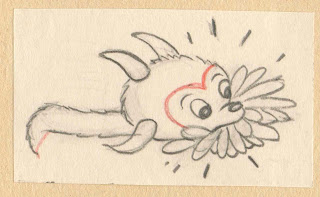 From "Don Donald" (1937). From the Ingeborg Willy Scrapbook.
Wikipedia: Don Donald (first released on January 9, 1937).was Donald Duck's first headliner cartoon. It introduces Donna Duck for the first time as Donald's girlfriend. Clarence Nash voices both since Donna's voice is the same as Donald's an octave higher. The cartoon takes place in Mexico and tells the story of Don Donald going to greet his girlfriend Donna. Donald rides a burro and lets Donna also ride it, but unfortunately Donna hates the animal. Angered at blowing his chances with Donna, Donald trades in his burro for a flashy new red car. Donna loves the new car until it breaks down in the middle of nowhere. She leaves Donald, who is left with nothing but a shrunken sombrero.
Posted by Bob Cowan at 11:27 AM No comments:

Here's a nice concept watercolor from Schlesinger/Warner.  The films, however, were well crafted.  To me, it seemed that many of the cartoons of this period had similar character design -- regardless of studio. This is a watercolor concept of several characters.  The color in vivid, character depiction is good, the sight gag of the musicians of different heights using the same bow was clever.  Just a great piece of colorful whimsy for the walls... 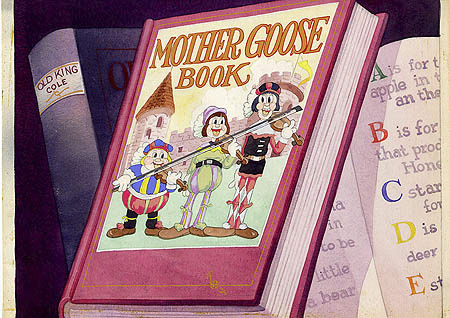 IMDB: Another entry in the "books come alive" subgenre, with possibly more books coming alive than any other. We begin with some musical numbers, notably the various pages of Green Pastures all joining in on a song, The Thin Man entering The White House Cookbook and exiting much fatter, and The House of Seven (Clark) Gables singing backup to Old King Cole. The Three Musketeers break loose, become Three Men on a Horse, grab the Seven Keys to Baldpate, and set the Prisoner of Zenda free. They are soon chased by horsemen from The Charge of the Light Brigade and Under Two Flags and beset by the cannons of All Quiet on the Western Front. All this disturbs the sleep of Rip Van Winkle, who opens Hurricane so that everyone is (all together now) Gone with the Wind.  Written by Jon Reeves {jreeves@imdb.com}

The globe on the cover of Pearl Buck's book "The Good Earth" requests blessings for people in his family, including "Papa Leon and Uncle Ray." This is in reference to Leon Schlesinger, who was the executive producer of the Warner Brothers Looney Tunes/Merrie Melodies cartoons up until 1944, and Raymond Katz, Schlesinger's brother-in-law, who also worked in the cartoon studio.
Posted by Bob Cowan at 10:17 AM No comments:

Email ThisBlogThis!Share to TwitterShare to FacebookShare to Pinterest
Labels: "Do You Have Any Castles" (1938) [Series], 1930s, Category-Film, Studio-Warner, Type-Concept

Now, a return to the 1940's!  I only have one item from The Baggage Buster (1941) and it is great!  This is a fantastic watercolor pan Master Background!  I like it because of its simplicity and focus on the center Depot Building...  It makes a great wall hanging because of its large size (the unframed image is almost 58-inches wide)!  The marks on the lower right are start/stop timing marks and cel position marks -- there are position marks on the bottom center as well.

FYI:  I was going to modify the light/dark elements in Photoshop until I looked at the color chart that I included in the larger original shot.  The light tone of the background is correct and to add some contrast would not have given the correct impression about the pieces role as a "background" element... 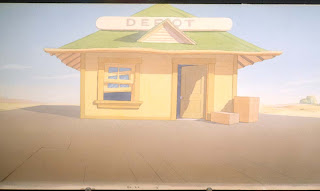 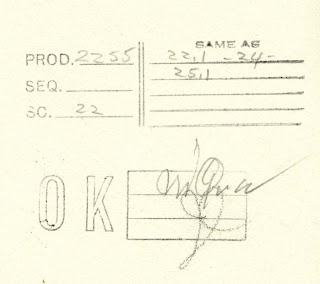 A fantastic 5-cel set-up of the animals getting ready to get on the Art.  I'm afraid I couldn't get an image that really matched the wonderful quality of this large (25"x19").  In this segment, Donald is Noah's First Mate that has to deal with the detail of getting everyone on board... 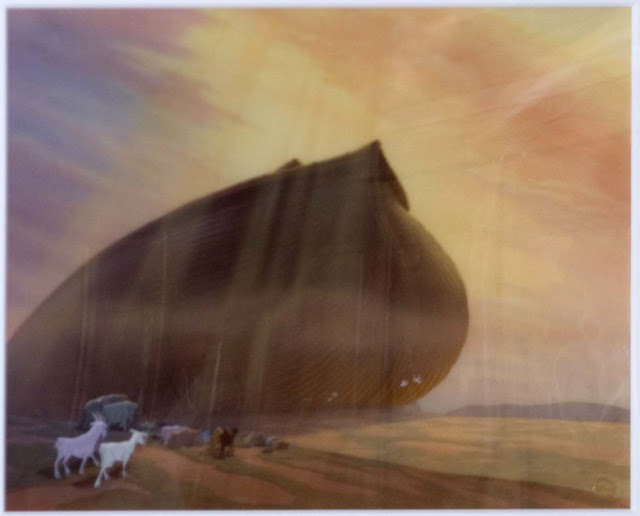 wikipedia: Edward Elgar's Pomp and Circumstance - Marches 1, 2, 3 and 4 – is a pastiche of the story of Noah's Ark, with Donald Duck as first mate to Noah. Donald musters the animals to the Ark, and misses, loses, and is reunited with Daisy Duck in the process; music arranged by Peter Schickele, including a wordless soprano solo by Kathleen Battle as part of the No. 1 March ('Land of Hope and Glory').
Posted by Bob Cowan at 7:57 AM No comments: